REVIEW: All the Rage by Courtney Summers 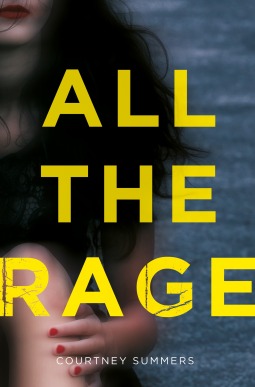 I received this book for free from Macmillan Children's Books in exchange for an honest review. This does not affect my opinion of the book or the content of my review.

Kellan Turner is not the golden boy everyone thinks he is and Romy Grey knows that for a fact. But when she speaks up, she is branded a liar. Telling the truth has cost her everything, because no one wants to believe a girl from the wrong side of town.
But when news of Kellan assaulting another girl gets out, the cost of staying silent might be more than Romy can bear.All The Rage examines the shame and silence inflicted upon young women in a culture that refuses to protect them.

I have wanted to read something by Courtney Summers ever since I first heard Holly Bourne talk about how amazing her books are, but until now they haven’t been published in the UK, which is a crying shame. We’re really missing out!

All the Rage is a harrowing look at rape culture and the way we treat people who have been raped. Loosely inspired by the Steubenville case which was in the news at the time of Summers writing the book, protagonist Romy is bullied and thrown out of her social circle because nobody in the small, US town she lives in will believe that she has been raped by the “golden boy” of the town.

The plot line is extremely gripping and so unpredictable – I could have never guessed the massive twists. They had me gasping in shock because I couldn’t believe what had happened! I felt so connected to the story that the events really affected me as I was reading them and I had to read on to find out what happened.

It’s clear when reading All the Rage that Summers is a master of the writing craft. The way that she tells the story is perfect and I was hooked from beginning to end; I kept telling myself, “Just one more chapter!” and then it turned into five and six and then seven… I loved how natural it felt, as if you were in Romy’s town and witnessing the hate she received. Summers’ writing is perfect and works so well with the story; it has its own voice and comes alive with every word.

However, what Summers does best is include diverse characters that blend seamlessly into the story line. It doesn’t feel as if diverse characters are added so that they can be ticked off on a checklist, but because they’re real people too. I loved the secondary characters in this book and how they fitted in to Romy’s story – they had their own lives but also worked towards creating a bigger picture too.

All the Rage is definitely going to be my go-to recommendation for the future. I’d love to see more of Courtney Summers’ books published in the UK soon because the UK needs more Courtney Summers books! I know I’d be the first person to buy them if they were published.

You’ll Love This If….

You’ve read Asking For It by Louise O’Neill! They tie in nicely together as they’re inspired by the same case, and the stories do overlap in places.

You’re looking for a thrilling read that you can’t put down.

You’re a feminist and want to read more YA books with feminist topics!

Have you read All the Rage? What did you think of it? If you haven’t read it, let me know if you’re going to!