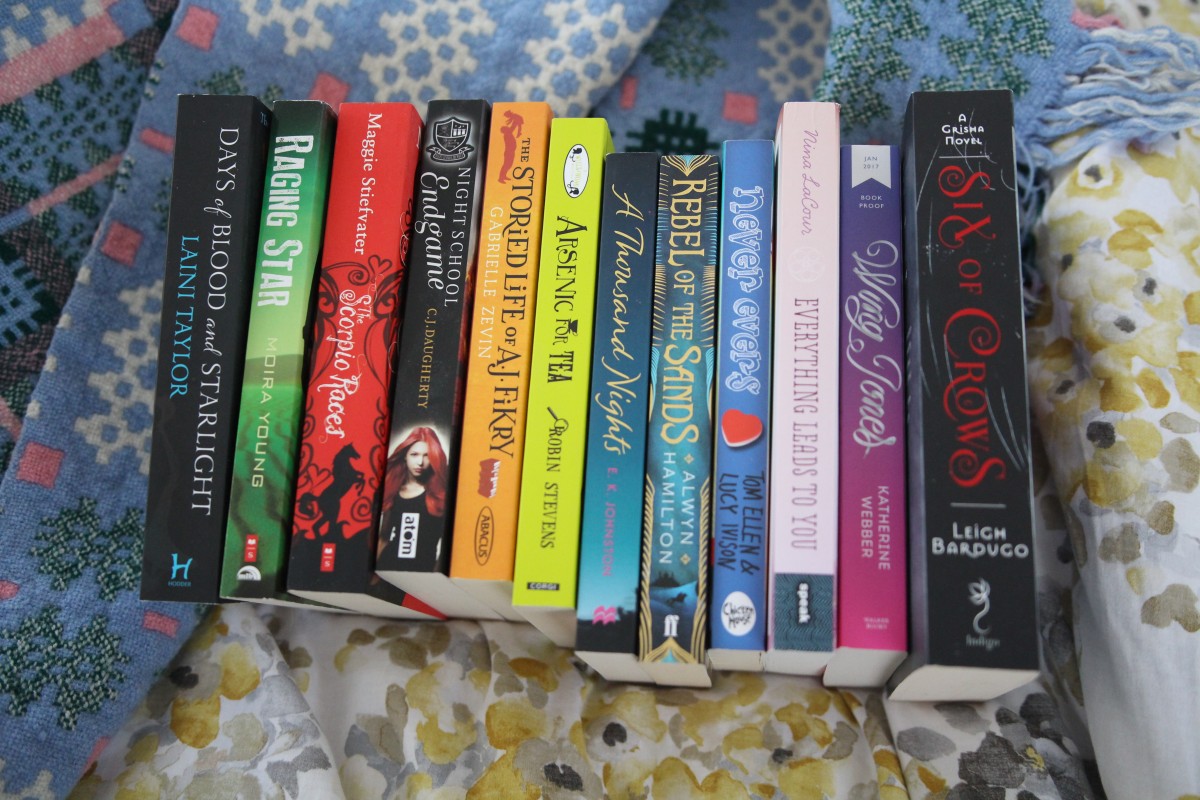 I cannot believe that it’s already December. This year has flown by at an incredible rate, and I’ve read some amazing books so far. I want to binge read my way to the end – so I’ve put together a very large TBR that I want to work my way through up until New Year. Who knows if I’ll read them all?! (Probably not.)

There’s a lot of fantasy included because I’m working on a fantasy series at the moment – lots of research is being done, which means reading around the genre a bit more! I also really want to finish some of the series and trilogies that I’ve been meaning to read for absolutely ages.

Six of Crows by Leigh Bardugo

It seems like everyone has read and loved Six of Crows, so I’ve been putting it off for ages because I really want to love it and I’m worried I won’t. It’s the first book in a duology, the second book being Crooked Kingdom, so the hope is to read them both back-to-back if I enjoy Six of Crows.

It’s about a criminal gang who work together to pull off a heist and I’ve heard so much about how awesome the characters are that I can’t wait to dive into it to meet them. So far, I’ve read the first chapter and it’s really good. Hopefully it will continue that way!

Wing Jones is one of my most-anticipated releases of 2016 so when a copy popped through my letterbox, I was EXTREMELY excited. Understatement. Katherine is one of my favourite people on the Internet and super lovely, so I have no doubt that I’m going to love Wing Jones with all my heart.

It tells the story of teenager Wing who is caught between two different worlds – she has a grandmother from China and another from Ghana, so she’s stuck between the two cultures. Wing is a runner and running is the one thing that could save her family, who have recently experienced a tragedy. It’s also the thing that could keep her from the one thing she wants. How AMAZING does that sound?!?!

Everything Leads to You by Nina LaCour

I haven’t read a super good US contemporary in AGES and this year I’ve read a shamefully low amount of LGBTQ+ fiction, so Everything Leads to You is going to be my cure for this.

It’s set in Los Angeles with a main character who is a production designer and working in the film industry. Emi, however, still feels like every other teenager when it comes to romance. I think it sounds so cute! It’s exactly what I need.

I have been meaning to read Never Evers since last year after loving Tom Ellen and Lucy Ivison’s debut novel, Lobsters. As winter ended though, I knew it would be better for me to read it as it started getting colder again and I could get into the winter spirit. So now is finally time to read it!

It’s on the slightly younger side of the YA scale – as opposed to Lobsters, which was for slightly older teens – and is set during a school ski trip. It’s about friendship, awkward romantic endeavours, and also a French pop star who turns up at the same time as the school trip… I think it’s going to be great!

Rebel of the Sands by Alwyn Hamilton

Whenever I scroll through Twitter, I always see people raving about how good Rebel of the Sands is. I *need* to read this soon!

It’s described as “an epic story of swirling desert sands, love, magic and revolution” which I think will be perfect to read now that I’m trying to get to more fantasy. I also want to read it before the sequel comes out next year, so I can stay up to date. I’m keeping my fingers crossed that I’ll really like it!

A Thousand Nights by E.K. Johnston

A Thousand Nights is a YA retelling of Arabian Nights, which I’ve never read and don’t know too much about, to be honest. I picked it up, though, because it sounds really interesting – about a girl who tells stories to keep herself alive in a palace where she is sure death awaits. As her stories become more intricate and beautiful, though, her magic becomes more powerful.

It sounds beautiful and I love books that have individual stories interweaved into the main plot.

Arsenic for Tea by Robin Stevens

I adored Robin’s debut novel, Murder Most Unladylike, and Arsenic for Tea is the second book in the series. They’re so quaint and amongst my favourite middle grade books. I can’t wait to continue on with the series and get back to Hazel and Daisy, the best pair of detectives ever.

In Arsenic for Tea, Hazel and Daisy have to solve the case of a poisoning that happens at Daisy’s home, Fallingford, over the school holidays. The books are set in the 1930’s and always make me feel super good inside, despite all the murder going on. They’re impossible not to love!

The Storied Life of A.J. Fikry by Gabrielle Zevin

I heard about The Storied Life of A.J. Fikry a while back and loved Stacey’s review of it. A book about books?! I’m already in love.

It’s about the owner of a failing bookshop that one day finds a little girl on his doorstep with a note attached to her asking if he will look after her. It sounds incredibly cute and sweet, which I think will be perfect for the Christmas period.

The Night School series is one of my all-time favourites, but I’ve been super awful at finishing series this year. I think it’s because I don’t want to let them go! Night School Endgame is the final book in the series and the penultimate ended on such a cliffhanger that I’m not sure how I’ve waited this long for the next book.

I can already tell that it will be thrilling and exciting and will most likely smash my heart into smithereens, but all I can say to that is: BRING IT ON! I am so ready for it.

The Scorpio Races by Maggie Stiefvater

Maggie Stiefvater is one of my favourite authors of all time and I’ve read the majority of her books, but not The Scorpio Races yet. Her writing is beautiful and lyrical; I’m constantly in awe when I read her books. If I can be half as good as her one day, it would be incredible!

It’s a standalone novel about a competition that happens every year where only one person can win. The first line is, “It is the first day of November and so, today, someone will die.” If that’s not the most thrilling first sentence ever, I don’t know what is.

I was obsessed with Blood Red Road and Rebel Heart when I read them a few years ago, but then never read the last book in the trilogy. I think I’m a little bit insane for leaving it this long, but it is a testament to the awesomeness of these books that I’m just as excited years later as I was then.

The trilogy is set in a post-apocalyptic future with a wasteland setting and Moira Young writes in such an interesting style that makes it so easy to get in the head of the protagonist, Saba. I can’t wait to jump back in to the incredible world that Moira has created – and I’m sure it will make me want to re-read all of the books again!

Days of Blood and Starlight by Laini Taylor

Days of Blood and Starlight is the second book in Laini Taylor’s Daughter of Smoke and Bone trilogy. Again, it’s a trilogy that I started a few years ago and loved at the time, but I was reading so much that the subsequent books slipped through my net.

I want to finish this trilogy before I start Laini’s next, which starts with Strange the Dreamer. She’s absolutely amazing at creating a totally believable world and she’s one of my favourite fantasy writers. This is going to be fantastic!

What are you aiming to read in December? Let me know in the comments below!

If you enjoyed reading this post, press the ‘heart’ button below!